Last year I blogged about the Valentine snack I was sending to daycare with my son. It’s become one of my most popular blog posts and pins on Pinterest. Since this topic seems to be so popular, I decided to share the Valentine treat I’m sending with him this year. I got the idea from Pinterest and I used a pre-made label I found on another blog. I’ve got an infant and a toddler that keep me very busy, I need SIMPLE! I didn’t want to do candy, I’m sure the kids will get plenty of that and my son LOVES these Go Go Squeez applesauce pouches so I knew this was the right fit for his Valentine this year.

I bought the regular applesauce flavor of the Go Go Squeez pouches. These are great on the go, no spoon needed! Plus they are all natural….and I must say, they are very tasty! I found the big pack on sale at Target so my son has a few extra for himself. I printed the “valentine, you’re my main squeeze” label from here:
http://funkypolkadotgiraffe.blogspot.com/2013/02/preschool-valentines-youre-my-main.html.
There’s a free pdf document you can print. EASY! Next, I took some colored construction paper I already had and cut circles with some fancy scissors. Make these circles bigger than the label circles so the label will sit in the middle. Adhere the cut out “main squeeze” label to the construction paper circle with a glue stick or tape. Punch a hole in the top and use some ribbon to tie it around the applesauce pouch. At the bottom of the label I wrote – FROM: CADE. That’s it! Easy peasy, cheap, healthy and cute!

**NEW RECIPES ARE POSTED AT THE BOTTOM OF THIS POST**

If you try any recipe from this blog, TRY THIS ONE!!!! I was drinking 20+ grams of carbs a day in 4 tablespoons of store bought coffee creamer until I started making my own. This recipe is adaptable for many different flavors and as I try different flavor options, I will post the recipes here.

I’m not even going to go into the ingredients in store bought creamer, but if you’ve ever read them, I bet you can’t pronounce some of them. Plus they are loaded with sugar and made with milk. That equals CARBS! Here’s the back of the creamer that was in my fridge.

My first batch is Cinnamon Vanilla.

Pour almond milk into a saucepan and heat to a low simmer. Whisk in the honey and condensed milk. Turn off the heat and whisk in the cinnamon and vanilla. Remove the pan from the stove to cool. Once cooled pour into a reusable airtight container. This should last 7-10 days refrigerated.

Tips: I like my creamer sweet, if you don’t like it very sweet then start with 2-3 tbls of honey and taste it along the way. Possibly omit the honey and use the vanilla and cinnamon as the only flavoring. Omit the condensed milk if you are wanting dairy free, but remember that is a contributing factor to the sweetness and thickness. I urge you to experiment with different flavors and experiment with the ingredients you use and how much you use.

If those numbers don’t convince you to try this recipe, I don’t know what will! It’s even more satisfying knowing that I know what ingredients are in my coffee creamer and it’s SUPER EASY TO MAKE!

Oh, and did I mention this is low fat and low calorie too?!

This creamer is sweet enough where I don’t need to add any sugar or sweetener! I use about 4 tbls of this creamer which is 10.72 grams of carbs!

Compared to my previous method with store bought creamer which was 5 grams of carbs per tablespoon for a total of 20 grams of carbs.

I’ve cut my carb intake from creamer IN HALF! I also know exactly what ingredients are in my creamer, too!

END_OF_DOCUMENT_TOKEN_TO_BE_REPLACED

Yes, you read that right…..this is a recipe for low carb fried zucchini. It has all the crispy goodness and flavor of traditional fried zucchini, but a fraction of the carbs thanks to a coating of parmesan cheese & pork rinds. You will see pork rinds as breading in many of my low carb recipes because pork rinds have ZERO carbs and the original flavor is very versatile to use in many dishes. Last time you saw them in my Low Carb Peanut Butter Balls and you’ll see them again in many more of my recipes. Grab a few bags for your pantry, they are a nice substitute with dips instead of using chips as well as a great breading!

First you want to pre-heat your vegetable oil so it’s ready for frying when you are. I use a skillet with deep sides for frying with about an inch of oil in the pan. While the oil is heating, crush the pork rinds until they are about the size of panko bread crumbs. I put mine in a plastic zip top bag and crush with a rolling pin. In a dish with sides, mix your crushed pork rinds with the parmesan cheese and set aside. Whisk the egg with a little water in a separate bowl and set aside. Cut your zucchini into disks about 1/2 an inch thick. Once everything is prepared, set up an assembly line with your zucchini slices, egg mixture and pork rind crumbs. Dip a piece of zucchini in the egg mixture and coat both sides, then dip the piece of zucchini in the pork rinds and coat both sides and then carefully put the zucchini in the oil. Fry on each side for 2-3 mintues or until golden brown. Repeat each step until all pieces are coated and fried. I fry in batches so the pan doesn’t get overcrowded. Drain on a plate lined with paper towels and sprinkle with salt.

Enjoy as a snack or accompaniment to any meal! 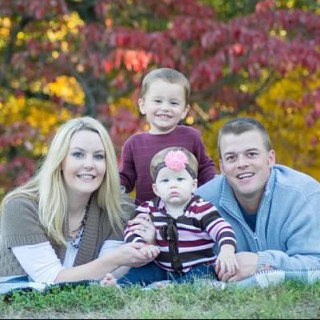 I decided to start a blog because I am a natural “sharer”. I love to share ideas, recipes, thoughts and opinions with everyone I know. I am a working mother with two busy toddlers. I enjoy finding ways to save money and be thrifty. I’m a coupon clipper, sale shopper and DIY enthusiast. I love to cook, decorate, craft and try new things. I'm a Pinterest addict! I love to make homemade gifts and I make and sell Infinity Scarves in my Etsy Store. I recently started a new business, I partnered with two world renowned Doctor's to help people achieve the best skin of their life. I’m just a regular gal who enjoys spending time with her family and friends, traveling, cooking, decorating, crafting, helping people and trying new things. I hope you enjoy my blog and maybe pick up a few tips or learn something new. You never know when “simple” can turn into “something”.

MAKING LIFE'S SIMPLE PLEASURES INTO SOMETHING

my philosophy of life, one bite at a time